Five years ago, on Saturday the 24th of September, my life changed in ways I could never have predicted.  And though my life now, 5 years later, is amazing, the road to where I am now has been challenging.  Understatement of the year.  All in all, for the majority of the time, I am happy, healthy, newly married (in May) and ‘completely’ healed from my attack.  I have to put completely in quotation marks because I am not sure I will ever be completely over what happened.  That has been very apparent this last week.  Physically I have been a bit of a wreck.  My body seems to understand what my mind is incapable of grasping:  my attack is still stored in my cells, in the muscle memory of my physical self.  Well, crap.

On Monday I decided I needed to know exactly when DCD was being released from prison.  According to my calculations it should’ve been right around now.  He received a 6 year sentence and has to serve 85% of it, less time served at sentencing, which was 317 days.  When I put his name in the ‘who’s in jail’ web site, I got nothing.  I remembered he had used another name, looked through my files to find it, put that name in, and got the same result…not in the system.  I thought I had signed up to be notified when that happened, but, it turned out, I had not.  Crap, again.  So I called the California Department of Corrections and Rehabilitation to find out his status.  The officer I spoke with asked for his prisoner number, which I did not have.  He asked if I was the victim.  I told him I was.  He gave me the number I was lacking and told me where he is now housed and that he would not be getting out any time soon.  He also suggested I call the Office of Victim and Survivor Rights and Services to find out more information about his release date.  I did this and that’s when I found out I neglected to actually sign up to be notified when he would be released.  It’s not that I am afraid he will come after me once he is released.  I simply want to know when he is out.

Life does go on, and as much as I’d love to never have had this happen, it did.  The following quote pretty much sums up how I feel about it now: 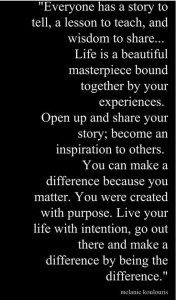 We all get to choose how we react to what happens to us.  I choose to see it as a blessing, and to share my ongoing, ever-changing story.  My hope is that I am making a “difference by being the difference.”