When I was twelve years old, I decided I wanted to be a fashion designer, an interior designer and a model.  Over the years I have actually done all three.  My road to becoming a model, though, was the most challenging.  First and foremost, which I did not realize at the time, was I had to ‘grow’ into my own face.  If you look at pictures of me as a teenager you can see clearly that I was not ‘fully cooked’ at that point.  When I was 19 I dated, if not THE, than at least one of the top male models in the world.  He told me then that I could be a model.  It took me 8 years to really believe him.  I tried when I was 23, which is even considered old for a model.  I was living in Atlanta at the time and Elite/John Casablancas had an agency there.  I met with John and he told me that they would be happy to represent me after I got my nose fixed.  (I had broken it at a swim meet when I was 14.) What you have to keep in mind here was that at that time in the modeling business, perfection, or at least what was considered ‘perfect’ was the driving force, and a crooked nose wasn’t it.  I refused to fix my nose because I thought it was silly.  It wasn’t like it was sideways on my face.  This, however, did make me question myself and why I ever thought I could be a model. 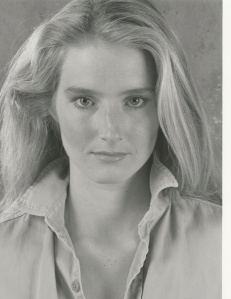 What you also must understand is I grew up being told by my brothers that I was fat and ugly.  Even my mother used to call me a big, fat walrus.  Years later when I asked my mother about this, she told me that she thought I knew she was kidding, that I was a skinny little girl, so why would I believe what she was saying?  Ah, the power of words…good and bad.  Why would I believe anything else?  So, I had that going for me, too.  After I had shot with a photographer, a real fashion photographer, and had these beautiful (I thought, anyway) pictures, I showed my brother Michael, and he said, “You are still ugly.”  I did not really think I was ugly, because outside of my family I definitely had a more positive experience.  Still, when you are told something every day of your life, doesn’t matter if it is true or not, you believe it to be true.  And it took me years to stop believing it.

Fast forward 3 years and we are now living in Chicago.  I am doing a lot of television and film work and cannot let go of the idea of being a model.  So I gather the photos I had from  years earlier and make the rounds of the agencies in Chicago.  Keep in mind, I am now 26 years old.  At one particular agency, the booker is looking through my portfolio, flipping the pages and making noises like she approves.  She then asks me how old I am.  I say, “26.” She slams my book shut, hands it across the desk to me, and says, “You’re too old.”  I thought she was wrong, and an idiot, but I took my book and left the agency.  The next one on my list did not take walk-ins, so I mailed my headshot and waited to hear.  In about a week, I received a call.  (Remember I was married and we were living with my in-laws as we were saving to buy a house.)  My mother-in-law answered the phone and proceeds to tell the caller that she isn’t sure how old I am, but that I am married to her son, and he’s 27.  Oh, great, I think.  But this agent thought I was about 14 from my picture and wanted me to come in to meet her in person.  From that point on, I mostly lied about my age.  So ridiculous, but so necessary in a business that loves really young girls. 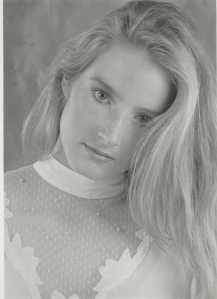 I sign with this agency and start shooting with lots of different photographers to build my portfolio.  About six months later, with a completely new book, and now 27 years old, I go back to the agency that told me I was too old.  (I knew she’d never remember me, and I was right.)  I was not what was called exclusive with my agency, so this wasn’t against the rules.  This agency, though, specialized in runway more than anything else, and I thought I might like to do runway.  So, the agent is looking through my new book, and as before is making noises like she likes what she is seeing.  She then looks up at me and says, “How old are you?”  I say, “21.”  And she says, “Here, fill this out.”

In the summer of 1987, an agency from Milan comes to town, looking for girls to take to Italy.  I am one of those chosen.  A couple of weeks later, a German agent arrives and when he asks me how old I am, I tell him 21, which is what my agent told me to tell him.  He likes me and my look and I am again one of the girls chosen to go to Europe.  In the end, we decide Germany is a better market for me.  My ticket is made for September and a week later another girl from my agency will be joining me, and we will live together.  Everything is set up through the agencies, both in Chicago and in Hamburg.  Here I am, 27 years old, never having been out of the country other than to Baja when I was 20, going off to Europe to model!  It was a very exciting time, and I was scared to death.  Although I had taken German in high school, you couldn’t really say that I spoke the language.  The first week I was there, I was on the phone every day with my husband, crying that I wanted to come home.  Luckily, he understood that I was just scared.  It took me a week to adjust, and by the time Jan Marie arrived, I was fine, loving it, in fact.