I knew there were lots of changes on the way.  That is, after all, why I chose change for my word this year.  What has become extremely clear to me in the last month and a half since we left Coronado, is change is flipping hard.  I mean really difficult.  It’s not like I haven’t had lots of changes in life before now.  I have, and some of them were excruciatingly hard to come to terms with.  This is different though.  We actually chose to move to Ventura.  We came 5 or 6 times, starting last December, and we thought we liked it here.  It seemed like a nice community, the beach is right there and, most importantly, it is affordable.  By affordable, I mean that for a coastal town in Southern California, the housing prices are not so bad.  It’s all relative, of course.  It is still stinking expensive if compared to other parts of the country.

We arrived to our furnished rental house on 12 May.  We had been sort of ‘homeless’ since 30 March when the movers came and took all our belongings to my brother-in-law’s house for storage.  We stayed next door at our neighbor’s back guest house for 3 nights, went to Ventura for one day/night to meet with the homeowners of the house we are renting for 5 months and also buy a king mattress to be delivered on 12 May, then to Las Vegas for 4 nights (3 in a hotel, 1 at my sister’s,) back to San Diego for 2 nights at my cousin’s in Rancho Bernardo and finally ended at the Crown Inn on Coronado for the last 3 nights of our having-no-place-to-call-our-own time.  It wasn’t really that bad, but once we finally got to ‘our’ new house, we were so happy we would be staying put for a while. It’s the moving around every few days that got to me/us.

What has also become clear to me since getting to Ventura is we accidentally rented a Hobbit house!  I am not kidding.  The house itself is about 900 square feet, which is only about 100 square feet smaller than the house on Coronado.  The problem is the layout of the rooms.  Again, not horrible, it just takes time to get used to it.  (For me, apparently, a lot of time.)  No, what makes it a Hobbit house is that everything is so small.  For instance, we do have a washer and dryer in the basement.  For those of you who do not live in California, basements are not common.  This house is on a hill, which allows for a basement.  Of sorts. 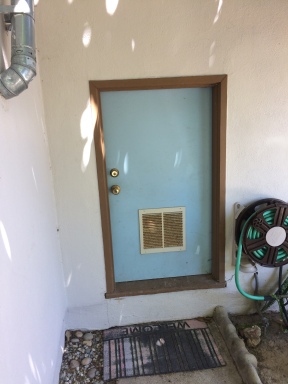 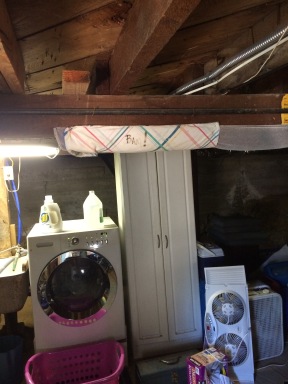 That pretty blue door is the door to the basement.  It’s also where we keep our bicycles, and you can be sure, lifting the bikes up and over the wall is a total pain.  One of the first days here I almost gave myself a concussion because I did not duck enough to get through the doorway.  The height of the ceiling once in the door is about six feet!  And the crossbeam even has a padded wrap and the homeowner was kind enough to write BAM! on it, just as a reminder.  While I am able to stand up straight on either side of that beam, my husband being 6’4″ cannot.  Needless to say, it is my job to do the laundry.

Everything is just on a much smaller scale in the house.  The bathtub is teeny, not that I fit in most tubs anyway at 5’10”.  Even the door jambs are quite small, and I seem to regularly bang my shoulders when I walk through.  We sometimes wonder how we missed these things when we originally looked at the house back in February.  I think at that point we were just happy to have found a short-term rental house.

And now we are not really liking Ventura.  It is hard to figure out why.  It is so different from Coronado, and we (especially me, having been there for 15 years) are really spoiled from living there.  I could walk everywhere on the island; here, not so much.  Sure, I can go for walks, but I want to be able to walk to the grocery store, and here it just isn’t a possibility.  It is so much busier, too.  Island life truly was more relaxed and laid-back.  It could be that it will just take time to get used to my new surroundings.  Or I may never feel comfortable here.  Only time will tell.

Your life can change in a split second and mine did just that on 24 September 2011. In the years since my attack, I have continued on my healing journey. It has taken far longer than I anticipated and has taken detours I never suspected would occur. It is a journey, though, and all that has happened just moves me forward, which is a good thing. My purpose for this web site is to tell my story and to encourage others in similar journeys. In this country (USA) the subjects of sexual assault and suicide are still very taboo. It is my intention to change that. If you know someone that could benefit from this site, PLEASE, PLEASE pass along my web site and or email address (atlonglastheard@gmail.com). It really is that important.

this is my life after losing everything & starting over (and over, and over)

Welcome to the inner workings of my mind

An honest look at living with bulimia.

Reflections on the Art of Living

Own Your Power, Live Your Truth!

Discover the truth about mental health

We're all in this together