How many times have we heard that we need to trust the process?  That we need to have faith that everything happens in perfect and Divine timing?  While I think both of those things are important, the truth is it all comes down to timing.  You can meet the right person at the wrong time.  Or who turns out to be a wrong person at the right time.  But until the planets align and everything else conspires in your favor, for lack of a better way to put it, you are probably barking up the wrong tree.  I know I was.

After my breakup with B, I so wanted to be ready for another relationship, and to that end, I tried March.com.  Twice.  Nothing happened, and I do mean nothing.  No response from anyone, let alone anyone I might have fancied.  Clearly, I was not ready.  I seemed to have a negative force field surrounding my photos and my profile, that, basically said, STAY AWAY!  Seriously, this was not a healthy thing to put myself through.  I finally realized that I still needed time to heal and grieve; heal from my attack and grieve for my lost relationship.  And while I missed B horribly at times, I also realized it was not so much him that I missed but being in a relationship.  Because in spite of what we went through with my sexual assault, we did have a very good, even great, relationship.  Unfortunately, as I’ve said before, however good the relationship was between us, it did not survive my attack.

Finally, this past January, 2 years after my breakup, I joined a Coronado singles group.  It was, as all these groups seem to be, mostly women.  I did meet a guy who I thought was a potential partner.  In the end, though, it was not a good match.  And speaking of Match, I would periodically look to see if there were any (new) interesting men on the site.  What I discovered to my dismay was that it was all the same men who always seem to be on there.  Not very promising at all.  I truly was on the point of giving up completely, of deciding that, perhaps, I was not meant to be in a loving relationship, after all.  This did not make me happy, but I simply was not willing to compromise on what I want and know I deserve.  So, one more time I was checking out Match.com and, on the spur of the moment, I joined.  The difference was I was actually ready.  I knew it, and I knew I’d meet someone this time.

It happened very quickly.  I joined on a Wednesday, was contacted by J on Thursday, talked on the phone with him on Friday, met on Monday, had a second date on Thursday before leaving town for a family reunion, texted with him while gone, and have had several more dates with him since.  I think you can kind of get the picture.  What was so cool, what is so cool is that we both knew right from the start that it was exactly what/who we had both been looking/hoping/praying would show up for, well, ever.  I knew as soon as I read his profile, but was hesitant to say it out loud , even to myself.  But I KNEW.  I just knew.  And he knew, too.

So what it really does come down to is timing, trite as it may seem.  I was ready, he was ready, and we connected.  And I can honestly say, he was worth the incredibly long wait!

Just a few quotes that seem particularly on point: 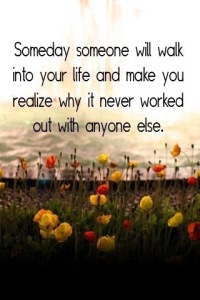 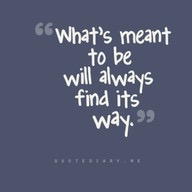 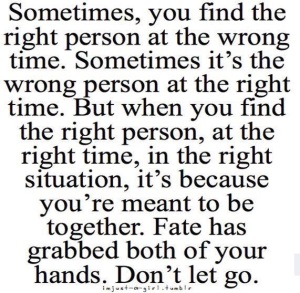