Two of my last three posts have been about, basically, being active and moving my body, and how important it is to me.  It’s why I am challenging myself to do yoga for 28 days in a row.  What is amazing is that I am able to do all that I do now.   I was born with metatarsus adductus, which is commonly known as pigeon toe or in-toeing.  Apparently, it is quite common, and most cases are mild.   Mine, however, was extreme.  The causes of it are still unknown but, in my case, while in my mother’s womb, my feet bent and stayed that way.  My feet were so crooked and turned in that starting somewhere around 8 months, I had to wear a polio brace, the kind that had the metal bar from knee to knee.  I searched and searched for a picture of this type of brace but I was unable to find one.  So, there I was, an 8 month old baby, a quite active, climb-out-of-my-playpen kind of baby, wearing a brace on my little legs to try to straighten out my feet.  I started walking at 9 months, and I must have been a sight.  I clearly liked walking from a very early age and didn’t let the fact that I was in a brace keep me from it.  The picture below is me on my first birthday.  You can see the angle of my left foot, even after 4 months of being in a brace. 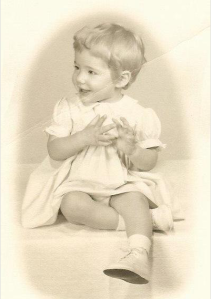 At some point, which I of course do not remember and neither does my mother, the polio bar brace was replaced with a brace similar to this one… 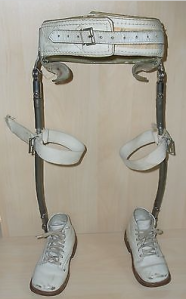 This was as close as I could find to what I wore.  For five years!  I seem to remember that the metal bars went down both sides of my legs, but I could be wrong about that.  All I do remember for sure is how much I hated, despised is probably a better word, wearing it.  And I had to wear it 24 hours a day.  The only time I didn’t have to have my braces on was bath time and when my feet grew and I had to get new shoes attached to the metal bars.  Other than those two times, I always had them on.  I wore them through kindergarten.  Thankfully, by the time I went to first grade I was finished with them.

As if this wasn’t enough, when I was 11, I had a growth spurt that messed my knees up, pretty much, for life.  I grew too tall, too fast, and this caused my knee caps to slide and for fluid to accumulate on my knees.  Luckily, it was never enough that I had to have a giant needle stuck into my knee to remove it.   When it first happened, I was splinted, told to take aspirin however many times a day (don’t remember exactly) and given my first pair of crutches.  And from then on, I was on crutches at some point every single year until I was 19 years old.  I ‘broke’ my splint within a week.  I couldn’t stand having my leg immobilized and each day would practice bending my splint until it broke.  Of course, all that meant was I had to go back to the hospital and get another one.

So, like I said, at some point in each year from 1971 to 1979, my knees would flare up, and back to the orthopedic doctor we would go.  If I remember correctly, I only had a splint the first time, but I would have to use crutches for a few weeks at a time until the pain went away and I could put my full weight on it again.  And I took so much aspirin that it stopped working for me.  I then switched to Tylenol when that came on the market, until that stopped working, too.  Now, ibuprofen is the only pain reliever that (sort of) works for me.  Actually, thinking about it now, that first growth spurt was big, but I continued to grow until I was about 20 or 21, which is probably why I had problems all through my teens.

When I was 17, I was sitting on the back of a metal folding chair and fell over backwards and when I hit the ground, my foot somehow hit the seat of the chair and my heel broke.  You can’t really cast a heel, but you can use crutches.  I had permanent calluses on my hands and under my arms from using them so often.  Then, when I was almost 19, the night before I was leaving to spend the summer in Wildwood, New Jersey, I stepped on a rake handle wearing Dr. Scholls sandals and broke three bones in my right foot.  That necessitated a trip into Atlanta (at the time my parents were living in Canton and there was no orthopedic doc on staff at the hospital) to get x-rays and a soft cast.  I did make my flight the next morning, on crutches, though that made it impossible to get a job as a cocktail waitress, since I couldn’t tell potential employers exactly how long I would be on said crutches.  Instead, I worked in a sea shell shop on the Boardwalk.

Though I continued to have periodic problems with my knees, especially my right one, I more or less stayed off of crutches until my later 30s.  I was in Barcelona and tripped crossing the street and tore cartilage in my knee.  Not, of course, my ‘bad’ right knee, but my left knee.  While in Spain, it was misdiagnosed as severe tendonitis.  I stayed off of it and by the time I got back to the States a month later, it seemed fine.  Six months later, though, it started clicking.   Long story short, I had to have surgery, where 30% of my meniscus was removed, and fun, fun, fun, I got to be on crutches yet again.  When I went to physical therapy after my surgery and told the story of the history of my knees, my therapist was astounded that it had taken that long for me to have had a serious problem.  Well, really, if I wouldn’t have tripped and wrecked my better knee…

I do know that yoga has helped my knees over the last 3 1/2 years.  And while there are certain poses that I will most likely never be able to do, that’s okay.  At least I am still able to walk, and I am happy to say I have not been on crutches since 1997, and I am doing my best to keep it that way.