When I lived in Hamburg in 1987, there was West Germany and East Germany.  This was  a little over 2 years before the wall came down. 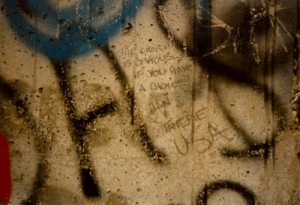 This is a little hard to read, probably because we had to write on the wall in pencil!  It says: The choice is obvious… if you have a choice.  Jan & Tamerie USA

With my friends, Dan  and David at Checkpoint Charlie.

The following came from my journal, written on 2 November 1987, after spending Halloween weekend in Berlin and returning to Hamburg:  “Had trouble getting to sleep Friday night.  And then was awakened by the phone just as I was drifting off.  I was pissed.  I got up at 5:30, so I had a big 3 hours of sleep.  I guess I was just excited about the trip.  We got to the station okay and with plenty of time.  Once we got on the train, Dan and David go into a smoking car.  At first we thought maybe the lady in there did not smoke, but we soon found out differently.  So we decided to move.  Dan and I went to find an empty non-smoking car.  We found one and he told me to hurry and go get Jan and David before more people got on the train.  So I go running down the car and as I got to the car that they were in, I slipped and fell flat on my back, my ass, actually.  It hurt so bad.  Luckily, I wasn’t hurt worse.  I could have cracked my head open.  It was really funny to see, I’m sure.  One minute I’m upright and the next, nowhere to be seen, unless you happen to be looking at the floor.  Anyway, we changed cars.  It was a 4 hour and 15 minute ride.  Not bad.  We got into Berlin at !2:15.  We went straight into East Berlin, so we had to carry our luggage with us.  What a bummer.  But before we went through the passport check, we had to wait in line for at least an hour.  Dan and David went through.  Then I did.  Jan, however, was not allowed to pass through.  The 3 of us were already on the other side and didn’t know what was going on.  No one would tell us anything.  It was really scary.  After about 45 minutes they finally allowed Jan to pass through. It turned out the reason they held he back was her passport.   They thought it was fake, and because her name is German, they got really mean.  They weren’t telling her anything either when they were holding her.  She has got to get a new passport.  She had a little bit of trouble coming back last night also.  They checked it over many times and even asked her about it before they said it was okay.

East Germany was quite an experience.  I’m sure glad I’m not from there.  The countryside was so desolate in places.  Barbed wire fences were everywhere.  And because it was Saturday afternoon when we finally were walking around in the “East,” no stores, or anything for that matter, were open.  There really weren’t any stores to speak of though.  We went up in this one church tower, which was pretty neat.  We mostly just walked around and took pictures.  We ended up eating dinner in East Berlin.  We each got something different and passed it all around.  It was pretty good.  The law was you had to be out of East Berlin by 8 o’clock, so we left after dinner.

When we first arrived in East Berlin, we had to buy East German Marks, which was the only money accepted in East Germany, and accepted no place else in the world.  In theory, we were supposed to spend all we changed, and not take any with us.  At dinner, we left huge tips, but I kept my extra money.  I still have it today.  Also, in East Berlin, you had to pay to use a public bathroom (and I use the term loosely here)  and the toilet paper was, literally, just like sandpaper.  In fact, sandpaper might be softer.  Not a pleasant experience.

Though not quite as difficult as getting into East Berlin had been, when we left we still had to stand in all kinds of lines.  By the time we finally got back to the West, we were freezing.  (It was the end of October in Germany, after all.)  Dan decided we should save money and take the subway to the center of town to look for a hotel.  We did that but all we found were big, expensive ones.  We finally found a tourist office and they made us a reservation at a pension.  I wasn’t quite sure what that was since I had never stayed in one before.  It turned out to be really nice.  David called the room that Dan and I ended up sharing “The Emperor’s Suite” and for good reason.  It was at least twice the size of their room.  It was quite amusing.  Anyway, the room had 2 single beds pushed together and another single bed.  It had a sitting area with a love seat and chairs.  We had a sink.  And there was even a terrace with French Doors.

It was about 9:45 by the time we got all settled in.  The plan was to nap for a couple of hours and then hit the town.  We were in West Berlin and it was Halloween night, so how could we not take advantage of that?  Well, it didn’t quite go according to plans.  Once we started to relax, no one felt much like going back out into the cold, so we talked and eventually fell asleep.

On Sunday morning, after breakfast, we went to the Wall.  How spooky!  It was an awful feeling, knowing how free we are and ten feet away on the other side of this cement fortress people have absolutely no freedom at all.  (And from Elton John’s Nikita–‘And if there comes a time, guns and gates no longer hold you in.  And if you’re free to make choice, just look toward the west and find a friend.’)  We took lots of pictures.  We also wrote on the wall.  I took a picture of it.  I hope it comes out.  After looking at the Wall for a while, we into the Checkpoint Charlie Museum.  Now that was scary.  It had all kinds of stories about successful and, unfortunately, unsuccessful escape attempts.  It was interesting, but I am sure glad I don’t live in the East.  I’m glad we went but once was enough to last me a lifetime.  And East Berlin was not a very pleasant place to be.  But at least I got an East Germany stamp in my passport and I have East German Marks as a souvenir.

We got back to Hamburg around 9:30.  We parted company with Dan and David at La Roma.  It was a fun trip, and except for Jan’s passport issue, pretty uneventful.”

When the Wall came down in late 1989, a German friend of mine from my agency in Barcelona was home for Christmas and went to the dismantling of it.  She brought everyone back a piece, which I, of course, still have.