I hesitate to say that the Christmas of 1983 was my best Christmas ever, but it certainly was up there on the list, and, really, I can’t name one that was better.  So, I guess, by default, it must be my best.  If you read my last post, you know my experience of Christmas over the years wasn’t so great.  Before I get into the details of what happened in 1983, I need to give you a little background.

On 29 October 1983 I got married.  I was 23 and my new husband had just turned 24 a few weeks before.  We should never have gotten married, and as it turned out, when we were divorcing 4 years later, if came out that he didn’t want to get married either.  We just did not know how to not go through with it.  At the time, though, it seemed like the thing to do.  I was living in Athens, going to the University of Georgia and hating every minute of it.  After moving to California in 1980 to establish residency so that I could go to UC Santa Cruz, I had decided to move back to Georgia (I do wonder sometimes how my life might be different if I’d stayed and gone to school out here.)  I was living at home, which at the time was in Canton, a town north of Atlanta.  I had no friends there because I had never lived in this town, and everyone I knew from high school was away at college.  I was working and trying to figure out where/what I wanted to do.  I decided I wanted to go back to school in Boston and chose Boston University.  My mother said, “Too expensive.  Pick another school.”  I had it in my mind that I wanted to be in New England, though I had never been at that point.  Since BU was out, I settled on University of New Hampshire.  I applied and was accepted, but wouldn’t be starting until the next fall, which was about 10 months away.  One day my mother said to me, “Why don’t you go to Georgia?”  Me, with no doubt a horrified look on my face and incredulity in my voice asked, “WHY?”  She said, “So you can get out of my hair sooner.”  I thought, okay, not what I want to do, but obviously she doesn’t want me around, so I applied and got into UGA and started winter quarter, which was January 1982.

I hated it from the very first moment.  Let me make that more clear – I HATED IT.  I was older than a lot of the kids, it was a giant school, my classes were huge and worst of all, I was bored.  So I got a job at Macy’s, part-time.  I figured I may as well get paid while I’m miserable.  That’s where I met my future husband, a year later.  He was a sales manager in housewares, and since I was what was called a floater, working in whichever department needed me, I eventually worked for him.  This was in January 1983.  We started dating, got engaged in June and got married in October. I guess you could say it was a whirlwind courtship..  But as I already said, neither of us really wanted to go through with it and did it anyway. 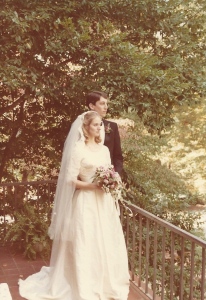 By the time we got married, my husband-to-be had been promoted to assistant buyer and we had moved to Atlanta, actually Clarkston.  I so clearly remember being walked down  the ‘aisle’ (we got married outside and it had rained the night before and the ground was still wet and my heels kept sinking in the grass with each step) and saying under my breath to my step-father, “I don’t want to do this; let’s go the other direction.”  I’m sure he thought I had cold feet, but nothing more.  He had no idea I was actually serious.  Even before we had gotten to this point, my mother had come into the room where I was finishing getting ready and said to me, “You don’t have to do this.”  All I could think was, ‘Really?  You’re going to go out there and tell all those people to leave, that I changed my mind?  I don’t think so.’  And so, I went through with it.

And now the good part – for Christmas that year, my brand new husband did the 12- Days of Christmas for me.  He knew I wasn’t fond of Christmas; okay, I pretty much hated it, but he was determined to change my mind and give me a Christmas that I might actually love.  Although now I do not remember the specific gifts he gave me, I still do remember that it was the first time I really enjoyed the holiday.  So beginning on the 14th, and ending on Christmas Day, he gave me a gift or gifts each day.  None was overly expensive or extravagant and he did his best to follow the song without literally giving me what the song said for that  particular day.  The only gift I remember was, I think, Day 8, when he gave me 8 crystal ornaments for the tree.  Or maybe it was Day 12, and there were 12 ornaments.  In any case, it was a fun and clever way for him to make my Christmas merry.

Today, Christmas is still not my favorite time of the year.  There always seems to be so much pressure.  I do my best to let it not get to me.  Don’t get me wrong, I do like aspects of it–the ornaments and twinkly lights (not that I actually decorate, though I do have lovely ornaments and such)–but the reality is just so much work, and because I am always working to get jobs finished before Christmas, and am super busy, I don’t feel like I have time to get into it fully.  And then it’s over.

Over the years, even though it wouldn’t be original, I have contemplated doing the 12- Days of Christmas gift giving for someone else, and, yet, it has never happened.  I do love the idea and maybe one of these years I’ll do it.